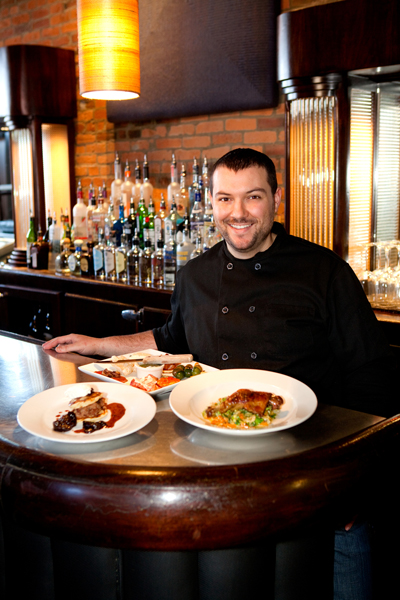 While working construction for one of his dad’s companies in California and then building homes with his brother in Washington, Oregon native Andrew Smith always wondered what it would be like to be a chef. “I found myself just taking notes watching cooking shows and reading tons of books,” Smith said. Without any experience working in restaurants, he decided to attend culinary school in Portland. “I knew that if I didn’t at least try it, I would regret it,” he said.

Smith has never looked back. “I got a really good job at a small little farm-to-table restaurant in Portland and learned a lot about seasonal ingredients and cooked with a lot of really great chefs,” Smith said. His best cooking experience thus far has been working with Charlie Zorich, a chef from the Portland area. “During that time with [Charlie], that whole experience just kind of opened my eyes to what food should be.”

After moving to Columbus with his wife to be closer to her family, he “somehow ended up” working at The Rossi Bar + Kitchen. “I started out as a cook and was made chef in three months. That was three and a half years ago,” Smith said.

“When I first started out, I didn’t know what the hell I was doing,” he said. “I knew how to cook, I had some management experience, but starting out it was just trying to stay alive and trying to do everything the right way that had kept The Rossi going for so long.” After learning how to make everything on the menu, Smith felt it was high time to reinvent it.

“It had probably been a good two or three years since [owners Randy and Tina Corbin] had actually done an overhaul of the menu,” Smith said. “Randy, Tina, and I seem to have very similar tastes, so they’ve pretty much liked everything that I’ve done.” The owners’ trust allowed Smith to change the menu from “very outdated to current.”

Though staples such as the New York style pizza and Rossi burger will never come off the menu, Smith has enjoyed being able regularly introduce new menu items. “We went from changing the menu only seasonally to changing it kind of whenever we want,” Smith said. “We’ve moved from having a hardback menu to a menu that we can print every two weeks if we wanted.”

Smith has also started butchering entire ducks, chickens, and even pigs at The Rossi. From cutting their own pork chops to making their own bacon and sausage, The Rossi also cures the jowls or cheeks for guanciale, dehydrates the skin for pork rinds, and even offers crispy pig ears on salads. “That kind of takes me back to my culinary school roots and my butcher class, and trying to do things the right way start to finish,” he said. “I had a lot of really good fortune growing up in the Pacific Northwest because there’s a lot of great food culture there.” Though he misses the abundance of readily available fresh ingredients, Smith believes the more limited offerings of Columbus have given him the drive to be more creative.

“You could come into The Rossi every single day and there’s always going to be something new, something different or interesting,” he said. Smith is excited to introduce spring items to the menu, including rabbit, duck, and a ribeye entree that “somehow tastes like a Reuben,” as well as the opportunity to use fresh local ingredients such as morel mushrooms, ramps, and asparagus. “We only serve asparagus during the spring here, and once it’s done, then we do something different. I try and save those things for when they’re best so that people can really enjoy them when they taste the best,” Smith said.

“There are a lot of things here at The Rossi that a lot of people don’t know about because it’s associated with burgers and pizza, and not that that’s bad. Every time I sell a pizza or a burger, it gives me more money to be creative somewhere else,” Smith said. But he has a feeling people are slowly starting to realize that The Rossi is more than just a pizza and burger restaurant.