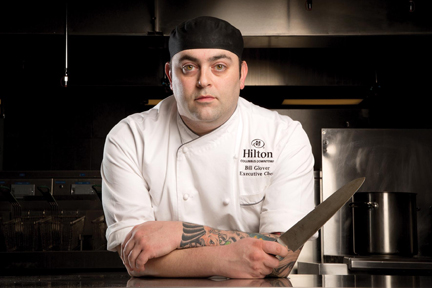 Since a young age, Bill Glover has had a penchant for figuring out what works. “As a kid, I basically would raid the fridge and pantry and I just created and mixed stuff up,” he said. “My mom would make me clean it up. Her condition for cooking was you can do whatever you want but just clean it up when you’re done. And that’s how I started to just experiment and find out what worked together, how ingredients worked together.”

It’s because of this experimentation that Glover is hard-pressed to pick just one dish as his favorite to cook. “You have to learn and be able to cook everything, to really be well-rounded,” he said. “I think it kind of helps that even when I was young and didn’t really get it, I was figuring it out. I just thought everything was cool. I tried baking, I tried making pasta, soups, and roasting chickens. It just was all interesting to me.”

Glover eventually traveled through Europe, where he ate some of his most memorable meals and honed his technique. “I remember this gnocchi I ate in Venice that blew my mind,” he said. “Steak I ate in Paris. Simple things I ate in Prague that really spoke to the simplicity of things. Things can be really good even if they’re really simple.”

This simplicity was showcased at Sage American bistro, a farm-to-table concept in Clintonville, which Glover owned and operated for five years. It was at Sage that Glover first met Christian Coffin, General Manager of the Hilton Downtown Columbus. “I asked him who his chef was and he said, ‘I don’t have one yet. Do you have any ideas?’ with a wry smile.” A week later, Glover told Coffin he was interested in the job. “He questioned whether I was serious,” Glover said with a laugh. “I said, ‘I am absolutely serious.’”

Now Executive Chef of Gallerie Bar & Bistro in the Hilton Downtown, Glover brought his culinary experience to help develop the restaurant’s style. “I grew up with a strong Italian influence, but when I got into wearing white coats for a job, it was all French,” he said. “French-rooted style, French-rooted technique. A lot of what I did [prior to Gallerie] was very close to being capable of called French, so I felt like it would translate well. I’ve kind of taken the same approach, just under the facade of a French restaurant, and for a lot of reasons it does adhere to some of those cultural techniques. Our charcuterie, and French cheeses, and stuff like that all kind of align itself with the French bistro cuisine.”

Glover’s favorite aspect of Gallerie is the facility. “It’s just phenomenal. It really makes it much easier to do your job when you have incredible equipment, and I still get to enjoy our local dining audience,” Glover said. “I get to speak to a lot of trendy guests that give a wider perspective on what we’re doing. It’s neat to talk to somebody that either has never been to Columbus and is pleasantly surprised by how cool our city is, or somebody that is from a larger market and that can say that what we’re doing is would work in New York or LA or Chicago. You’re doing what you’re doing on a level that could be done elsewhere, you just choose to do it here. I think that’s a resonating trend in the feedback I get.”

His awareness of his audience and surroundings are an important part of Glover’s cooking philosophy. “There is no ‘Columbus dish,’” he said. “Philly has cheesesteaks, and Chicago maybe you could say hot dogs, New York pizza, Maryland and crab cakes. [Ohio] isn’t a state really, in Cleveland, Cincinnati, or Columbus, that you can easily identify with a ‘thing.’ I try to use local ingredients and showcase them in a way that isn’t over people’s heads, but has a little twist to make it interesting.”

Glover feels this approach helps to keep diners grounded, yet intrigued. “I feel like when chefs start getting into the ‘I’m going to educate my audience’ mindset, it doesn’t usually work. I don’t think people in the midwest want to be educated. They want to enjoy, they want to be intrigued, they want to be challenged. But going too far with that has proven to be unsuccessful with some people in town.”

Looking ahead, Glover is excited for warmer weather that will allow for outdoor events such as the Food and Wine Affair, as well as Gallerie’s continued growth. “I’m most looking forward to just continuing to grow our team and build upon the successes we’ve had. It’s always fun to see. It’s a great place to work.”