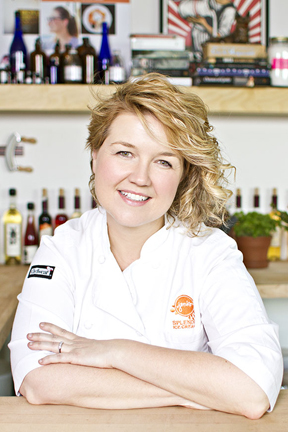 It’s safe to say Jeni’s Splendid Ice Creams and its creator, Jeni Britton Bauer, are names that have become synonymous with Columbus. The popularity Jeni’s has experienced outside of Columbus – and even outside of Ohio – has recently surged as opportunities arise and the business expands. But for Britton Bauer, making and selling ice cream is nothing new.

“I had been making ice cream since 1996 in Columbus, for almost 10 years, before I ever sold it [outside of Columbus],” Britton Bauer said. “The word-of-mouth traveled very slowly but steadily over the last 10 years. It’s all been very, very slow. It sort of feels like in a way, it exploded kind of recently nationally, but for me it’s been this long, 20-year journey.”

Britton Bauer credits the success of her ice cream outside of Columbus to the Jeni’s website, which ships ice cream nationally. “We started shipping directly from [Columbus], and that helped get us into newspapers like the New York Times, who fell in love with us from the beginning and have written many times about us,” she said. “If we hadn’t been able to sell ice cream to somebody who lives in New York, we wouldn’t have been eligible for those stories in national publications. We also sort of built this reputation over many years [in Columbus]. The people who come to visit Columbus remember [the ice cream] when they go back home.”

It goes without saying Jeni’s initial local success and subsequent reputation is a direct result of the product, the quality of which Britton Bauer credits to the inspiration she draws from the community. “I am 100% inspired by our community, and if I need inspiration, which I often do, I can find it here,” she said. “I can always find inspiration at the North Market, of course,” Britton Bauer said. “Not just because of the food there, but the people will bring me the newest stuff.”

Unconventional and unexpected places are also important sources of Britton Bauer’s creativity. “I go to the library, which I love. The library is sort of my centering/grounding spot. I don’t just go and study food there – which I do, too – but I go study culture. The Wexner Center is always a huge source of inspiration. Not that I’m going to go there and make an ice cream out of the art, but it’s sort of a cleansing experience. I can get inspired by color or by how somebody thought about something, and kind of get away from flavor for a minute,” she said. “When I go out and do book talks in the rest of America, I always talk about that – this essential part of my experience, Columbus.”

Britton Bauer works in her test kitchen daily to channel her experience and inspiration into creating the unique and seasonal artisan ice creams that have made her famous. “It always starts with something that I’m reading or something I’m inspired by,” she said. “This summer we’re doing the midwest as the inspiration. I grew up between Peoria, Illinois and here, so I feel like somewhat of an expert for the midwest. I have a ginormous stack of books on the midwest that I have been reading through the last few months, and we’re doing those flavors that sort of reflect that.” The new summer flavors scoop shops will feature include a “beautiful and amazing” rye, pumpernickel, and caraway cherry and a “delightful and refreshing” sun tea sorbet with cantaloupe.

The attention to creating a unique and unforgettable experience is an important aspect of the scoop shops, and one with which Britton Bauer has a lot of fun. Drawing from her own preferences for eating ice cream, her favorite of which is sundaes, she developed the idea for the crunchy, flavorful ice cream topper, Gravel.

Britton Bauer found a way to incorporate the community into the Gravel trend by using social media. “We put it back to people so that they could make their own sundaes and then photograph them on their phone, and kind of crowd-source a menu. You could go and look up Jeni’s Gravel on Instagram and see what other people have created and named, and then that kind of becomes the menu.” This summer, Jeni’s will switch to what Britton Bauer calls “curated sundaes,” which will have pre-determined toppings, though the Gravel and toppings will still be available to top any ice cream.

Another way Britton Bauer has social media to crowd-source the Jeni’s flavors is through Pinterest, where users can submit variations of the flavors found in her first cookbook, Jeni’s Splendid Ice Creams at Home. “The whole point of the book was to take the sort of bones that I laid out, but then to make your own, and mix-and-match and come up with new flavors. It’s been a ton of fun to watch.” Britton Bauer’s second cookbook, Jeni’s Splendid Ice Cream Desserts, comes out May 20.

But before the new book and summer flavors, Britton Bauer is excited for the upcoming Short North Gala. “The Gala is one of my favorite events of the year because it’s like a reunion,” she said. “It’s so much fun to see everybody from the community that comes out for it. I think the support for the Gala has increased and made it into the star event of the year for me.”