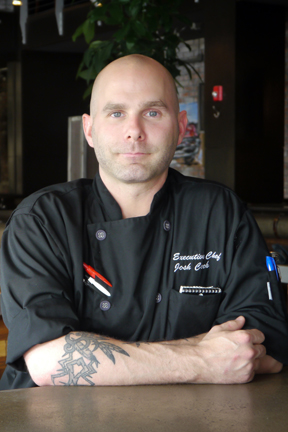 Before becoming executive chef at Hubbard Grille in 2011, Josh Cook had already gained considerable experience working in Columbus restaurants, including Wilhelm’s, Bravo, Abbracci, Due Amici, and Barrio. Though he has no formal culinary training, Cook developed his style and skill from his experiences at these restaurants and brought them to Hubbard. Shortly after Cook took over, Hubbard Grille won Best New Restaurant in 2011.

Since then, Cook has worked to develop the restaurant through trial and error. “Any time you change a menu, there’s gonna be happy people and people that you piss off, unfortunately,” he said. “We don’t want to piss our guests off, but also we want to keep it fresh and keep the options flowing and keep ‘em interested. We’ve tried things that have been successful and things that haven’t. We’re a young group but we’ve come a long way. We’re trying to learn from our mistakes and grow.”

And grow they have. In the three years since Cook started at Hubbard, he’s become highly attuned to what Hubbard’s customers want and keeps the restaurant’s location in mind when creating its menu. “It really goes back to the Short North,” he said. “The clientele we have here, we think of them first. We try to adhere to not only the growing trends, but to what we think the average person that lives within walking distance wants to come and enjoy. They want originality, and fresh, well thought-out food.”

Hubbard’s desire to keep its menu fresh is aided by its ability to use local food. “We try to do local as much as humanly possible to support the local economy,” Cook said. “We’ve got this guy that we get amazing tomatoes from, and we work closely with Laurel Valley Creamery and get some local cheese from them.”

Cook has also put thought into how the layout affects the restaurant, his favorite aspect of which is the upstairs lounge. “There’s not too many restaurants that have something like that, that’s actually pretty comfortable where you can lounge,” he said. “We have another full scale bar up there, so you can go up there, get a good glass of wine, and either look down at the restaurant or at the bar down here, or at the people walking on the sidewalk. That’s mesmerizing on its own.”

For spring, Cook is excited for Hubbard to feature a duck breast entree with a bourbon broth that he says is “unbelievable,” as well as duck dumplings that promise to be “delicate, robust and full-flavored from every aspect.” Given the amount of time Hubbard spends researching local produce, incorporating seasonal items, and developing its featured items, Cook is optimistic these dishes will be well received. “Columbus is a weird city for duck. Sometimes it’s a hard sell, but people are trying new things, and there’s so much more exposure to other foods. I feel like Columbus is growing and evolving into new things. The food scene here is getting more national recognition than it ever has before, and that’s encouraging.”

In addition to developing Hubbard Grille, Cook also oversees all five operations for Taste Hospitality Group, where the position of Executive Corporate Chef was created for him in 2013. “[They’re] trying to kind of bring the companies together and bring my culinary experiences and talents to the events centers,” Cook said. With the amount of expertise and enthusiasm Cook brings to the table, it’s safe to say Taste Hospitality put their goals for growth in the right hands.