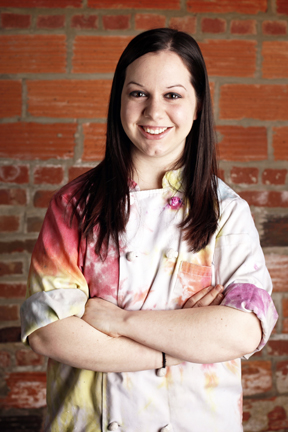 Pittsburgh native Lara Ranallo grew up baking with her mom, who eventually made her get a restaurant job the summer after she turned 15, while Ranallo said she was “avoiding getting a job.” Now, Chef Ranallo wouldn’t want to be anywhere but a kitchen.

“I love the energy of a kitchen and the fast-paced work environment,” she said. “I get to play with food all day and use that as a creative outlet. I don’t think I could see myself doing anything else.”

After attending Le Cordon Bleu School of Culinary Arts in Pittsburgh, Ranallo was ready to experience a new city. “Columbus was really starting to make its mark in the culinary world when I moved here in 2006,” she said. “I was able to take a really good job working fine dining in a high-end hotel. I got to see all aspects of the food and beverage industry there.”

It was during her time at the hotel that Ranallo was first introduced to the Columbus Food League group of restaurants when she took a part-time job at Tip Top Kitchen & Cocktails. After taking a full-time position at Tip Top, the opportunity to manage the kitchen of Surly Girl Saloon “literally came to me,” Ranallo said. “I was out to dinner one night when I ran into [Columbus Food League founder] Liz Lessner. She excitedly came running over to me saying, ‘Congrats, you are going to be the new Kitchen Manager at Surly Girl Saloon!’ I was very surprised, as [was co-owner and managing partner] Carmen Owens, who wasn’t too sure if she was going to hire me at the time; we hadn’t even met. Eventually everything fell into place and I’ve been part of the Surly Girl management team for over five years.”

Ranallo said her biggest project after starting at Surly Girl was menu development. “I tried to steer our menu into more of a Southwestern style,” she said. After introducing simple items such as cilantro lime rice, Ranallo’s accomplishment was a menu full of signature comfort food with a sassy, surly twist. Ranallo also worked on creating efficient production systems for the Surly Girl kitchen, which were adopted by the other Columbus Food League restaurants. Now, in addition to being Surly Girl’s kitchen manager, Ranallo said she is a consultant and trainer for new managers within the Columbus Food League family.

For Ranallo, the best aspect of Surly Girl is the ever-changing nature of restaurants. “The day-to-day operations are always new and you never know what to expect,” she said. “On the food end, trends are always changing and it’s fun to keep up with them. I hate being stagnant.”

Surly Girl avoids stagnation by keeping the menu fresh and fun. In addition to buying local ingredients, the restaurant pays homage to Columbus by naming dishes and drinks after local celebrities. “We always have a lot of fun getting involved with community projects and seeing how far we can push the Surly envelope,” Ranallo said.

Another favorite of the Surly Girl menu is the inventive array of cupcakes, which Ranallo said are the best part. “We love baking with the seasons. [We] look forward to lots of citrus and berry flavors this spring. And booze. Always boozy cupcakes.”

Ranallo also looks forward to the upcoming Short North Gala, which she said is her favorite annual event. This year, Surly Girl has even more to cause to celebrate at the Gala, where co-owner and “original surly girl” Carmen Owens will be recognized with an Unsung Hero Award at the event. “She is truly the backbone behind Surly Girl Saloon,” Ranallo said. “I wouldn’t have this opportunity if she hadn’t taken that chance on me.”