On April 26, 2015, 13 chefs from around the Short North Arts District are going to get their art on. The chefs recently toured the District’s galleries to admire the art, which they will be using as inspiration for their dishes at the Ninth Annual Short North Gala, presented by Borror Properties. This year, the Gala talent includes several newcomers that includes chefs from both recently-opened restaurants and long-time favorites, as well as an exciting new taste experience – mixologists. Get in on the collaboration and celebrate the Short North Arts District at this year’s Gala with good food, good drinks, and good art. Click here for more information. 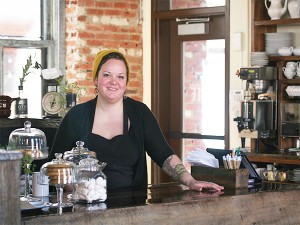 Nina Hernandez feels that the Short North Arts District is the platform where Columbus’ plethora of creative minds in visual arts, food, and music shine brightest. In addition to the rich culture that creativity affords, she also cherishes the diversity and inclusivity that is inherent in the neighborhood and creates its sense of community. “All the businesses recognize that they’re there because the other businesses exist,” she said.

In that spirit, Hernandez is already excited for the Short North Gala. “What I’ve gotten to experience so far with going to the galleries, it’s a cool way to bring different chefs together,” she said. Though Hernandez hasn’t yet been to a Gala, the preparation thus far has already been enjoyable. “It’s a cool way to get to know my peers and celebrate what we’re doing.”

What they’re doing is representing the District’s varied cuisines through several appetizers, a three-course meal, and a selection of desserts. But the creativity the chefs are bringing to the Gala goes beyond cooking; through their art-inspired food, the chefs are curating their own collection of artwork. For Hernandez, the Gala dishes are a way for attendees to get to know the chefs through their creative expression.

Hernandez is in “full brainstorming mode” for her Gala dessert. The bright colors and imperfect, varied lines she saw in pieces at the Pizzuti Collection inspired her to explore a more organic and abstract approach to making pastries. “Normally when I’m making something, I’m definitely thinking about art and the pastries are definitely a form of artistic expression. I recognize that all the time,” she said. “But most of the time I’m trying to make things that are the same, that are precise and almost perfect. Looking at these pieces kind of gave me a freedom to change it up a little bit and let happen what happens with this piece.”

In addition to the Pizzuti pieces, Hernandez was also drawn to a mosaic she saw at Studios on High Gallery. She feels the individuality of the pieces that work together to make the bigger mosaic could lend themselves well to the hundreds of small pastries she will be preparing for the Gala. As a result, Hernandez plans to make a cake with multiple layers baked on top of each other to show imperfect lines, incorporate bright colors, and use individual pieces to create the bigger, mosaic-like piece. 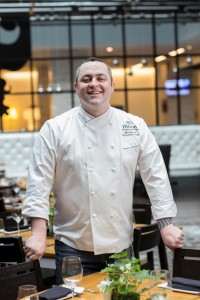 Being the executive chef of a hotel restaurant affords Bill Glover the unique opportunity to talk to many travelers. Visitors’ surprise upon experiencing the Short North Arts District’s rich cultural diversity always resonates with Glover; to him, that cultural diversity is an important and vibrant part of Columbus. “[The District] allows people like myself that are in the creative fields – art, food, and music – to have a venue right here in our city to really express ourselves,” he said.

Among many sources of inspiration that inform Glover’s self-expression is art. During his time at Sage, a farm-to-table concept in Clintonville that Glover owned and operated for five years, he curated a monthly art show. He ended up with a collection of pieces by Ohio artists, one of which he sees daily and feels is a “conduit to an emotional experience,” he said. “It’s a constant reminder that every day that you go out there, [your work is] part of the fabric that you sew. When you see the colorful approach that somebody that’s creative has taken their time and efforts to put on a canvas to display for others, it’s really an interesting process.”

At the Short North Gala, Glover will get a first-hand taste of that process. “[The gallery tour] was a very unique and creative way to look at how to come up with a dish, because I’ve never used that exercise to source out a composition on a plate,” he said.

Glover was inspired by paintings in Marcia Evans Gallery that reminded him of his first culinary inspirations in Paris in 1998, as well as sculptures in the Pizzuti Collection. Those sculptures have informed the ingredients Glover will likely use in his Gala dish, such as rare, high quality tuna, a textural aspect such as a crisp, a dried piece of shaved parsnip, and a floral garnish.

The collection of ingredients inspired by multiple sculptures are reminiscent of collaborative dinners Glover has organized at Gallerie, an effort he has focused heavily on and about which he is very serious. “[The Gala] is another example of doing a collaborative dinner on a much larger scale with the neighborhood, and I think that’s super important. I love that approach,” he said.

The Ninth Annual Short North Gala, presented by Borror Properties, will be on Sunday, April 26, 2015, at 6:00pm at the Hilton Columbus Downtown. Click here to buy tickets.