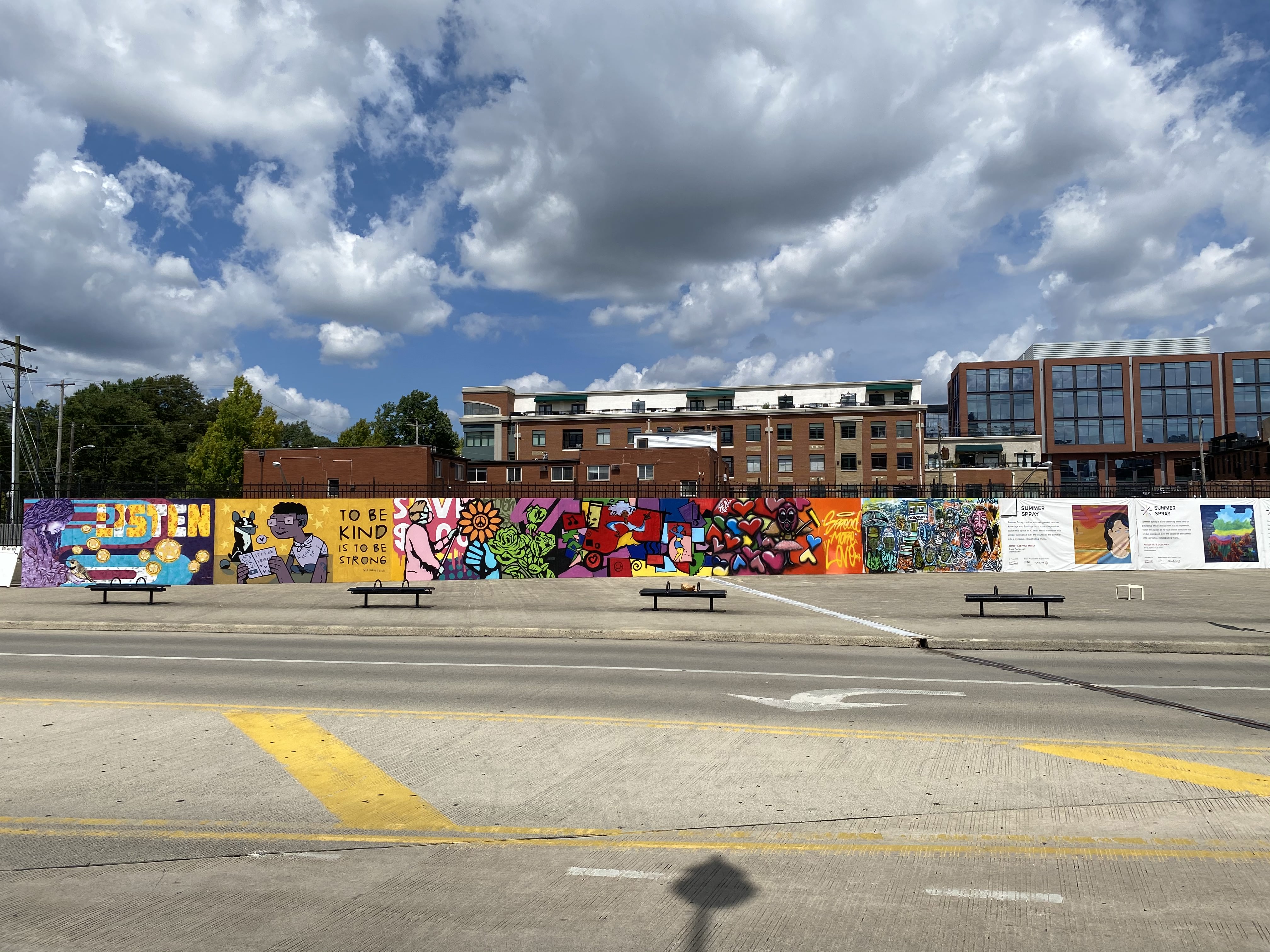 Summer Spray is a collaborative mural-making event that will showcase the live progressive creation of a dynamic 1,280-square-foot mural wall over the span of the summer. Each weekend, starting July 11, a local artist or artist duo will paint a designated section of the mural wall. Each artist will produce an in-the-moment creation inspired by their experiences, surroundings, and current conversations, as well as the artwork created by participating artists the weekends prior. While each artist’s piece will be unique, together they will create one brand new piece of locally-collaborated public art, which will live on in the Short North Arts District beyond its creation.

Summer Spray artists include the following, in order of weekends they will paint:

Artists Jen Kiko and Eric Rausch live with their family in Westerville, where Kiko works as an art teacher at Westerville Central High School. Kiko is a painter by passion, and has extensive training in compositional understanding and is the illustrative genius behind the Kiko-Rausch collaborative work. Rausch has a BFA in Ceramics from The Ohio State University, as well as an uncanny ability to pull off barely-thinkable ideas. He works and teaches from his studio, The Kiln Room, located just south of Downtown in The Fort. Rausch will also teach ceramics at the Cultural Arts Center when operations can resume post-COVID-19.

Thom Glick is an artist and educator based in Columbus, OH. His work is concerned with relationships — between people and nature, and self and community. The odd characters in his work are influenced by pop-culture and folklore. His illustration work has been published in newspapers and magazines throughout the United States, including in Seven Days, Forbes, Beer Advocate, and Dirt. He has completed murals for a variety of Columbus based projects including River & Rich, Otherworld, Gravity Uplifts, Easton Town Center, and Platform Brewing. Glick is an artist at Blockfort Studios and an adjunct at Columbus College of Art & Design. He earned BFA and MFA degrees from Columbus College of Art & Design.

Aaron Whisner is a designer and muralist currently based in Columbus, OH. Whisner was born in Oklahoma, but his family moved often. In the mid-90s, Whisner began to find himself enthralled with graffiti and street culture. His work draws inspiration from travel, hand-painted typography, street textures, and the temporal nature of public forms. Bold use of imagery, color, and texture are utilized in his work in an effort to capture public attention while seeking to maintain a balance with surrounding environments.

Hakim Callwood is a freelance illustrator and designer from Columbus, OH. His inspiration in art began with Marvel Comics hand-me-downs from his older brother. Callwood became a full-time visual artist in early 2017, selling and commissioning paintings on canvas, murals (including one which won an Addy Award), digital work, and animations and showing in galleries, and art event around the country. He has also created and completed his own comic books and painted for companies such as Columbus Crew, Sprite, and Facebook. His current goal is to finish more story-driven comic and animations of his original characters Spaceboy and Spacegirl, and his long-term goal is to create self-sustaining, educational, hands-on visual art workspaces.

Bryant Anthony, better known as “Bee1ne,” is a street artist from Cleveland, OH. Bee1ne is a partially self-taught artist who studied several mediums and practices at an early age, including as airbrushing, graphic design, and fashion. He completed several apprenticeships and internships with airbrush shops, tattoo shops, design firms, and commercial print shops, which led to a scholarship at the Columbus College of Art & Design, where he earned a BFA in Illustration. He has since had several successful solo exhibitions, and participated in community public art projects including Trash to Treasure for The Ohio State University Special Improvement District and The Journey Mural Artist-In-Residency program. Bee1ne is known for his signature heart motif and a “spread more love” message.

Chris Cropper is a self-taught mixed-media painter who uses found objects to create work on a variety of surfaces including wood, shoeboxes, and canvas, and is inspired by street art, graffiti, and urban spaces. He uses his life experiences to create a dialogue about our place in society as human beings, and the existential dread of everyday life. His work has been shown in galleries throughout the city, including 83 Gallery, Wild Goose Creative, 934 gallery, and Mac Worthington Gallery, as well as Pancakes & Booze in New York City, Hive Gallery in Los Angeles, The White Room Gallery in the Hamptons, and Tim Faulkner Gallery in Louisville.

Lee Van Mora is a self-taught freelance painter, fine artist, and muralist living and working in Columbus, OH. He creates mostly acrylic paintings, with some specialty 3D art, and is heavily influenced by concepts from quantum physics, philosophy, symbolism, and reincarnation. His work often displays geometric patterns that reveal portals meant to be pathways to a higher level of consciousness and being. His inspirations include classic Japanese Animation and Pop art, as well as Art Nouveau. He has previously completed murals for Urban Scrawl and 934Fest and is currently working toward earning an Animation Degree from the Columbus College of Art & Design, as well as an animation entitled TetrastarIV, and is completing commissions for private clients and local businesses such as CoverMyMeds.

Katie Golonka is a self-taught freelance artist and muralist based out of Columbus, OH. Golonka’s work is color- and composition-driven, with surreal narratives that often utilize various styles and techniques to create a stitched-together aesthetic. Her influences include folklore and monsters from different cultures, graphic art, and expressionism. Golonka divides her time between commissions, painting scenery and theatrical backdrops for professional productions through CATCO, mural work, and special effects makeup and fabrication for film. She participates regularly in solo and group shows in Columbus, and her mural work can be seen in locations around the area, as well as in the Polaris, Dublin, and Indianapolis Condado locations.

Robert Williams, who works under the name “Mrrobotgeek,” is a Columbus, OH-based oil painter who has worked as a tattoo artist for the past 16 years. He works in the Expressionist Cubism style, using bright colors and abstract subjects to represent emotions. His work has been shown at Wild Goose Creative and ROY G BIV Gallery, and he recently completed a mural on Madison, USA located at the corner of W. 5th Ave and N. High St.

Felicia Dunson, who works under the name “FDZgraffiti,” is a trained fine artist and art instructor with an urban arts background who lives and works in Columbus, OH. Her passions include sharing her gift with the community and fashion, and finds inspiration in music, pop culture, and bold, bright colors. She hopes to portray graffiti as a formal style that can be appreciated as a fine art. She is member of the Creative Women of Color Collective through the Art Makes Columbus campaign, and has been working with the Greater Columbus Arts Council on current events and art exhibitions in the Central Ohio area.