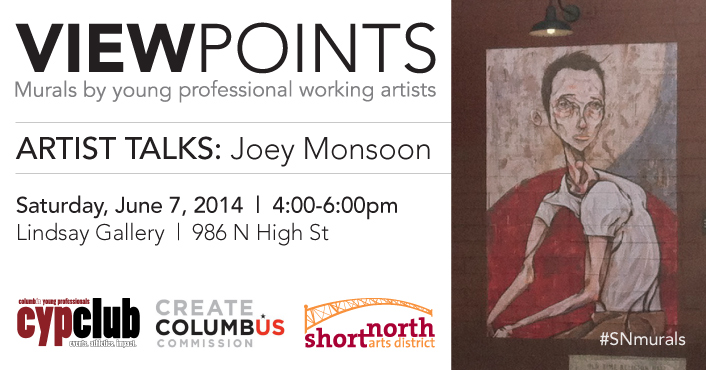 With a nine-to-five job in the pharmacy benefits sector of the healthcare industry, a wife, and a small son, Joey Monsoon could pass as nothing more than a typical guy. Unlike your average Joe, Monsoon’s talent as a figure painter has made him a respected name in the Columbus art community.

It is after a daily schedule of a desk job, family meals, and spending time with his wife and son that Monsoon has time to paint. “The most difficult part is probably when I get down to my studio, making sure that I’m completely physically and mentally in my studio,” he said. “It’s about discipline, and it’s about focus, and it’s about being able to turn off all the other things that I might have on my mind. Knowing that I only have maybe two hours to paint each day – I have to be able to sit down and start to paint.”

In spite of the time constraint, Monsoon is grateful for the time he has to focus on his art. “If we all step back and look at our lives, how many of us have two hours of our day that we set aside solely for something creative or something that we really get enjoyment out of? I have something that I can really pour myself into where I’m painting and I don’t have to spend my evenings thinking about work. It allows me to fully get into the flow of doing something that is completely freeing and completely enjoyable. I actually find myself very lucky to have a release from work-related responsibilities and those sorts of every-day responsibilities that we all deal with.”

However, Monsoon remains grounded and committed to the responsibilities he’s chosen. “A long time ago I accepted that if I want to have other things in life, like a family, I’m going to have to have a job,” he said. “But it has its benefits, too, because I don’t have to rely on selling paintings so I can pay the mortgage. It really actually liberates me in a lot of ways because if I never sell a painting, I have a job that pays for everything. I don’t need to worry about selling paintings to keep my life going.”

Though he’s been drawing since a young age, Monsoon is a self-taught artist who eventually “felt like the next step was to learn how to paint,” he said. “It was just sort of an evolution for me wanting to improve my abilities. It was definitely a challenging transition from relying really heavily on line work and quick marks to having to understand and develop more color and the medium of paint. It was an interesting transition. It took me awhile to go from painting in a drawing to evolve on to creating a painting.”

It was a couple of years after he began painting that Monsoon had his first solo show in 2009 with the Ohio Art League, and it was around this time that Lindsay Gallery owner Duff Lindsay reached out to him to express his interest in Monsoon’s work. “Obviously I was thrilled to even be on his radar,” Monsoon said. After discussing their shared interest in collaborating, Monsoon had his first exhibition with Lindsay Gallery in late 2010.

In December 2013, Monsoon debuted his third solo show at Lindsay Gallery, the portraits of which evoke powerful, personal emotions from their audience. “All of my pieces are really just inspired by the human figure,” he said. “At their core, that’s what I’m really most interested in painting – using the flesh and the gesture to convey some sort of emotion or experience. I feel like there is, in a sense, a protagonist in the figures themselves, and I hope that the audience is seeing my paintings as some sort of way to identify with the figure.”

That Monsoon doesn’t use models in any of his work is one of more unique aspects of his figures because of their ability to speak to their audience. “I use the human body with as little exterior context as possible to allow it to be that sole vessel for the communication or the conveyance of emotion or experience. Sometimes that is recognizing someone they know in the painting, or hopefully, maybe recognizing themselves in the painting. Not necessarily physically, but maybe they recognize an emotion or an inner experience within the figure that relates to them and reminds them of themselves or reminds them of an experience that they’ve had or an emotion that they’ve felt.”

Of the portraits Monsoon showed most recently at Lindsay Gallery, he had the opportunity to select Remember Your Spot for inclusion in the Viewpoints murals on High Street in the Short North. “It was a thrill for me to be able to select the painting that I thought was one of the strongest paintings of the group,” he said. “It has bold colors, it has a nice composition to it as far as the curve and the gesture, and I thought it would relate well to being large-scale and being out in the public.”

Above all else, Monsoon reiterates that the most important aspect of his work is how an audience connects to it.“I paint to paint. I’m not painting to tell a story. It’s really ultimately about how I love to paint,” Monsoon said. “If there’s a goal to communicate with the paintings, if there is a story or there is some sort of experience that I want to share, it’s that the viewer sees something or someone or themselves within the paintings, and that’s the connection that they make with the paintings. It becomes more than just looking at an image of another person, but they see something within that painting that reminds them of their own life. A lot of times, we are these people. We know them because it’s us.”