A web designer by day, Katie Valeska says she started her comics drawing hobby “as almost an accident” and “sort of by chance,” but her pursuit of drawing makes her experience leading up to comics read as more of a series of fortunate events. “I had been drawing ever since I could hold a pencil, or crayon, or marker, what have you; it’s always been a passion of mine,” she said. “I hadn’t really considered [drawing] seriously for a career until the end of high school when I discovered what graphic design was. It’s a little more than being a teacher or an illustrator because you’re working for a client in most instances. That was really a sweet spot for me.”

After graduating from Ohio University with a Bachelor of Fine Arts in Graphic Design in 2006, Valeska stopped drawing when she got a job and focused on assignments. “I realized there was something missing from my life, and it took me a couple years to figure out that [drawing was] what is was,” she said. “I challenged myself one New Year’s Eve to draw a comic and post it online the next day to just share it with people, to kind of hold myself accountable. I loved it so much that I just kept doing it. Once I got that back, I was so much happier. I felt so much more robust and productive. ”

Valeska eventually came across the Columbus comics scene while reading about a 24-hour comics drawing event hosted by Wild Goose Creative in Clintonville. “It seemed like a really neat event. I didn’t know if I was quite brave enough to try and stay up all night and draw a 24-page comic in 24 hours, but I wanted to at least see what it was all about. So I just kind of worked up my courage and I went to talk to people.” 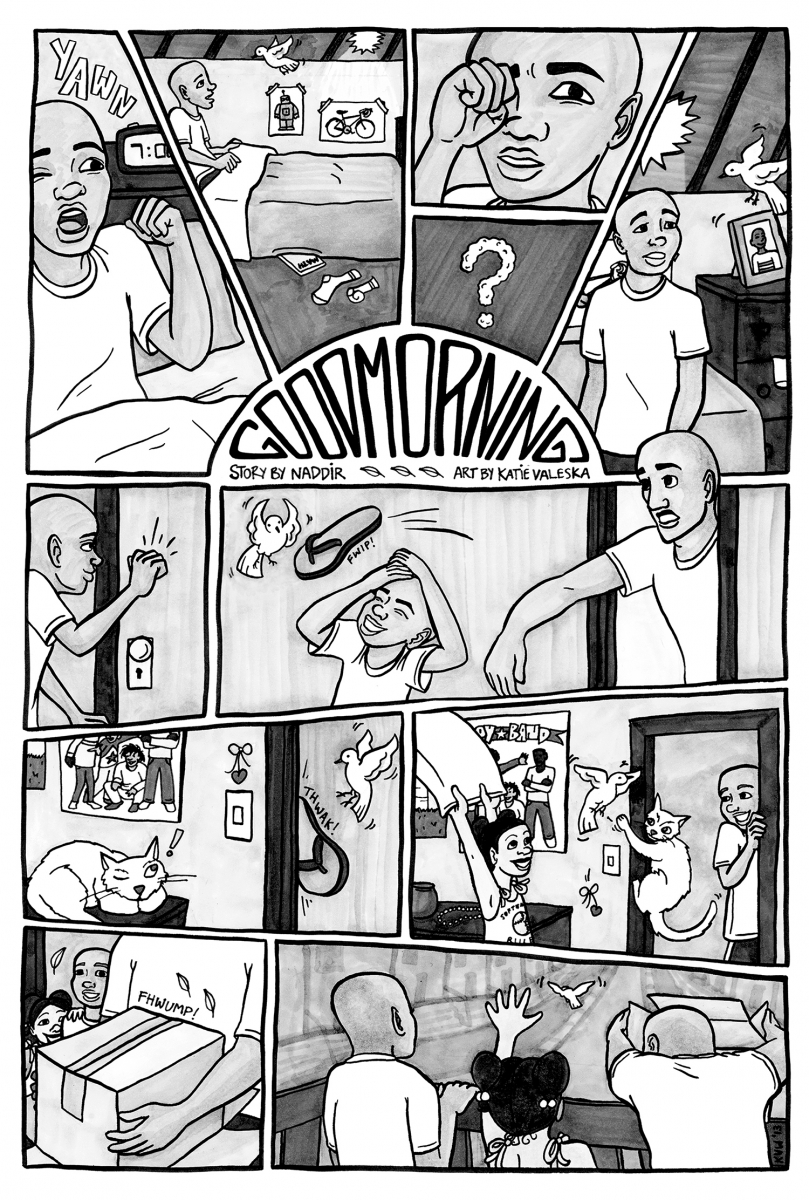 Among the people Valeska met at the event were writer James Moore and artist Joel Jackson, the founders of self-publishing Columbus comics label 2 Headed Monster Comics. In 2013, the label published a full-color print collection of Valeska’s 2010-2012 autobiographical webcomic, NEXT YEAR’S GIRL. She feels the Columbus comics community has helped to broaden her horizons. “I came out of nowhere and just went to say hello to some people and I made some instant friends I’ve had for a very long time. They’re very welcoming to of all sorts of careers, all genres, skill levels, interests.”

Valeska’s comics have since been featured in a number of projects, which she credits to exposure. “It’s all about building a good network, building good connections with other comic artists and fans, and getting your name out there. Going to as many shows as you can, exhibiting everywhere, just talking to people. Posting your work online. I’ve had some really great opportunities just because I posted a comic on Twitter or on Facebook.”

One such Twitter post attracted the attention of Elvis Costello, who used one of Valeska’s comics in his limited-edition 2011 box set, Elvis Costello & The Imposters: The Return of the Spectacular Spinning Songbook!!!. “That was just a dream come true,” Valeska said of having her work admired and featured by one of her “all-time favorite artists.”

The attention Valeska’s work has received also interested Jean Pitman, youth programs educator at the Wexner Center for the Arts, which is co-funding the Weinland Park Story Book project. Pitman approached Valeska about creating a comic based on a story submission from a Weinland Park resident. “I gravitated toward the stories that were by the children. There was just something very sweet and simple about them. I was really drawn to Good Morning because it was just such a cute little look into a slice-of-life story that could happen anywhere.”

Good Morning is about a little boy who wakes up one morning and realizes there is a bird in his room. The boy, his dad, and his little sister chase the bird around the house to catch it and set it free outside. “The part where they let the bird out in the neighborhood was all about Weinland park,” Valeska said. “There was something about it that made me feel like I could tell the story without words and really just let the pictures speak for themselves, so that was a fun little challenge, too.”

The Wexner Center then chose Good Morning to be featured in the Short North Viewpoints murals series. “I was very flattered that they decided to use my artwork. I thought it was just such a neat opportunity,” Valeska said. “I’m a big fan of public art and these murals around the Short North. I just think it’s a great, easy way to bring art out into the public and immerse the city in art. It’s such a culturally rich town. Any effort to increase the amount of art in the public space is a really good thing.”

Valeska encourages those interested in sharing their comics not to give up. “It’s hard to stay on it sometimes. You just have to make it easy for yourself to make comics. Clear out distractions, create a space where you can go and that’s all you have to do,” she said. “Just keep pen to paper, pencil to paper, pen to tablet, whatever it is that you do, whatever tools you use; keep going.”

Good Morning is located at 1204 N High St. From 4-6pm on Saturday, May 3, Valeska will discuss Good Morning, Columbus comic artists, and the Columbus comics scene as part of the Viewpoints Artist Talk series. The talk will be at the mural’s location on the corner of 5th Ave. and N High St.