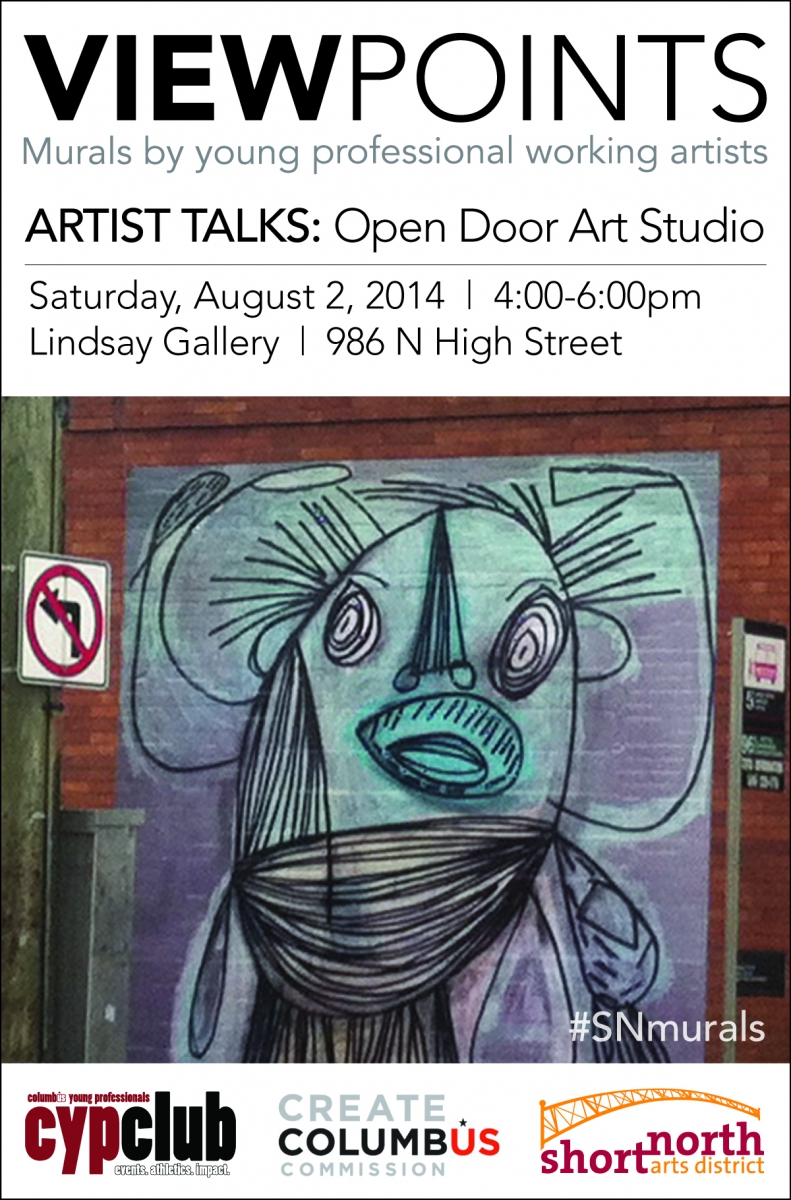 When artist Wallace Peck first began working with Open Door Art Studio, Sharon Dorsey was blown away by the prolific amount of art he created. “From day one, probably from the day he was old enough to hold a pencil, he just drew and drew and drew,” she said. Dorsey, who is the Volunteer Coordinator and Art Facilitator of Open Door, estimates the entire front room of the studio could easily be filled with all the pictures and sketches.

Luckily for the studio’s storage capacity, holding on to his artwork is just not Wallace’s style. “He’ll just draw and give [the pictures and sketches] away,” Dorsey said. “He’s always drawing people. He prefers to draw people he knows personally. He certainly has favorites, too, like people that come [to Open Door] all the time.” Fans of Wallace’s work include former North Market director David Wibel, who is now a close friend to the artist, and Ohio First Lady Karen Kasich, who chose Wallace to be the inaugural artist at “Spotlight: Featured Artists at the Ohio Governor's Residence,” a program launched in 2013 to celebrate Ohio artists.

Wallace’s success story begins at Gladden House, a community resource center, which was within walking distance of his childhood home in Franklinton. “He would go and just hang out there. There wasn’t really anything service-wise for him to do there, but he kind of endeared himself to the people that worked there,” Dorsey said. “They set him up with paper, pencils, markers, and just let him sit there and draw for hours and hours and hours.”

Eventually, Gladden House helped set up Wallace in the Park West Court Apartments, a housing facility run by Columbus Center for Human Services, Inc. that offers on-site nursing for people with disabilities. “It gave him a community and provided him the care he needed to thrive,” Dorsey said. It was through CCHS that Wallace became involved with Open Door, which is a division of the Center.

The more the staff at Open Door got to know Wallace, the more they were able to help facilitate his creative process when he began painting at the studio. Dorsey said Wallace is “fairly independent when he creates,” but the staff help him with certain tasks such as finishing the edges of his paintings, coating the canvases, and installing hangers on the backs.

In 2012, Wallace was chosen by the Columbus Arts Festival to show his work at the annual event as part of the Emerging Artists Program. “He did crazy-great at [the festival],” Dorsey said. His work created enough of a buzz to draw Duff Lindsay, who immediately took an interest in Wallace and his paintings. “Being somebody that’s very involved in the arts community and outside art in general, for [Duff Lindsay] to see [Wallace’s work] was a big deal,” Dorsey said.

Lindsay felt Wallace’s paintings would do well at Lindsay Gallery, which were exhibited there in June 2013; he was right. “[Wallace] almost sold out of everything,” Dorsey said. “Then he was held over for July, which wasn’t planned originally when we had agreed on June, and then Wallace made a bunch of new pieces to take the places of the ones that sold, and those sold. He didn’t sell out of his second show, but darn near close.”

It was after this show that Wallace’s work was chosen for the Ohio First Lady’s “Spotlight” program. “Things have just been exponentially getting better and better for him,” Dorsey said. “It’s such a crazy success story. It’s not just that [Wallace] found something that he really loves to do. He found something he loves to do and found an expansive audience of people that got it and were touched.”

For the Viewpoints murals public art series in the Short North, Open Door enlisted Lindsay’s expertise in choosing one of Wallace’s paintings. “We had a group of things we thought would be appropriate, and then Duff came over and kind of looked through the things we pulled aside and picked the one that he thought would make the best mural,” Dorsey said. “I was very happy to receive his advice on what to pick. I think it made a really amazing mural.”

The piece chosen for Viewpoints, Lady Liberty, was part of a series meant to have a national appeal. “Often, [Wallace] will choose the same thing over and over. But every so often we’ll ask if he would like something a little more challenging. He’s really open to different types of ideas. He really likes the challenge,” Dorsey said. “We were coming up with some ideas that would appeal to a large group of people. We agreed [the Statue of Liberty] would make a nice composition. He liked the idea and he did a couple sketches, and they were all wonderful. We’re always blown away with how he interprets certain things.” Lady Liberty is now displayed at 1209 N High St facing 5th Ave.

In addition to drawing and painting, Wallace also loves all sports and attending any sporting event, adding to his collection of baseball caps, country music in general and country music artist Alan Jackson in particular, and working at his job as a greeter at Walmart.

On Saturday, August 2, Wallace will accompany Dorsey at Lindsay Gallery, who will discuss progressive art studios that provide services to people with disabilities in the Viewpoints Artist Talk, Exploring Accessible Art Studios and How They Impact the Community. Dorsey will speak about Open Door and other nearby studios worth visiting that provide opportunities for artists with disabilities, as well as Wallace’s progression at Open Door. The talk will be during the August 2014 Gallery Hop from 4-6pm.