This past weekend, 15 local artists of varying mediums and experience met over two beautiful, sunshine-soaked days for an artist-in-residency (AIR) mural masterclass program with LA-based artists Ryan Sarfati and Eric Skontes. On Saturday, they spent three hours learning about creating a design and how to magnify it to mural sizes; using types of paint, from spray to latex to acrylic; and applying paints with tools including different sizes of spray can tips, brushes, and rollers. The next day, they gathered again with designs in hand to transform two 8′ x 20′ free-standing white-washed panels into vibrant collaborative murals that pay homage to the open and welcoming community that makes up the capital city.

After the last brush and spray can had been set down and the paint began to dry, we caught up with three of the artists, who are also represented by galleries in the Short North Arts District, about their experience in the AIR program. 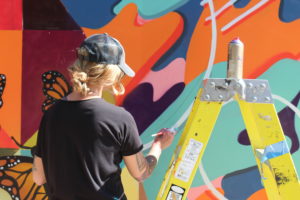 Why did you want to participate in the masterclass?
So far in my life, I have only had one opportunity to learn from two internationally known mural artists. While I hope more amazing opportunities like this will happen, I recognize the rarity of this and jumped at the chance to apply for this experience. I always want to be improving my skills and continuously learning. I never want my life or my work to feel stagnant. Not only was this an opportunity to learn from Eric and Ryan, it was also a chance to learn from other Columbus artists. I knew I would be forever kicking myself if I didn’t try for this residency.

What was your inspiration for your piece of the mural?
For the group mural, we decided to go with the theme of growth and progression and split it into sections and work in pairs. I was partnered with the super talented Ariel Peguero, whose work is very bold and multifaceted. Our styles are different, but both of us like to include a deeper meaning or narrative in our work. We knew we wanted to do something non-objective and colorful, and liked the idea of using a repeated shape. We started with the idea of the Linden community as a whole as opposed to a North/South division and liked the map line that included both areas. We started by making a stencil of the map lines and repeating that shape on the mural. Ariel has an amazing sense of color, and we went off his original sketch for the palette. When it became apparent that our original idea wasn’t working as well as we wanted visually, we started to round out the original shape and create something more organic that ultimately worked much better. 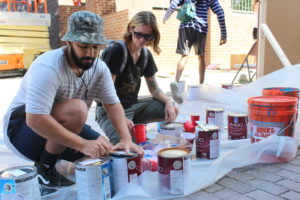 What was the mural making experience like for you on Sunday?
After learning about different techniques, tools, and mediums, I was eager to try some of them out. Not having much large scale painting experience, the task was, at first, a bit frustrating. I really had to let things happen and evolve organically and outside my comfort zone. I also wasn’t used to working with a group of artists and having a partner. Of course, all of these challenges are why I wanted to do the residency in the first place, so I could get out of that comfort zone and learn. We had around five hours to complete the mural, so time was another challenge. There was a point where I didn’t think our piece of the mural was going to turn out aesthetically pleasing at all. Luckily, Ariel and I were able to make some changes and push through. I was really happy with the end result and surprised myself with my ability to adapt. Stepping back, looking at our work as whole, I felt a big sense of pride. This residency started a spark within each of us and left us all on fire.

What did you learn from the masterclass?
My approach going into this residency was to make myself as sponge-like as possible. Ryan and Eric were so forthcoming with information and shared their process of writing a proposal and the components involved. I learned a lot from Ariel, too, and his use of Augmented Reality, which we hope to incorporate into a future collaboration together. I also learned that the artists community, which can often feel small and like everyone already knows each other, is much larger than I realized and is continuously growing. I truly felt the creative, beating pulse of Columbus during this residency weekend, and it made me really proud to be a part of such a supportive and innovative community. I ended the residency with new knowledge, feeling inspired and ready to take on some projects I might not have before. 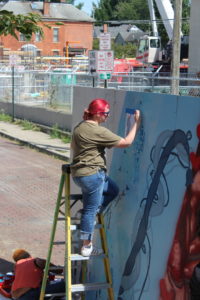 Why did you want to participate in the masterclass?
I have been doing street art for quite awhile now, and have experience putting up street art in the Short North in the past, so it’s kind of like coming home. I completely believe in the mural Ryan and Eric are making, and after meeting them, I have so much respect for them, and I’m really glad I did it.

What was your inspiration for your piece of the mural?
I wanted to pay homage to Ryan and Eric and their mural, titled The Journey. There’s a girl in the bottom corner of my section of the mural with a backpack on because she’s about to go on a journey. There are heart-shaped balloons near her that represent who she’s leaving behind; even though she loves them, she has to go. There’s another girl in the middle of the section whose shadow is turning into birds; that’s kind of like the middle of a journey, and the shadow is turning into birds because she’s feeling a bit of freedom from being able to feel powerful enough to take that journey. There are two other girls at the top of the section representing having reached the destination of the journey. I hope people will help other people, which is why the older girl is lifting the younger girl up toward a dandelion. 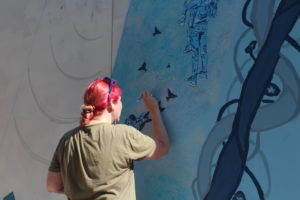 What was the mural making experience like for you on Sunday? What did you learn from the masterclass?
I’ve done street art that is 20 feet tall before, but never on as large a scale as Ryan and Eric have done. I learned a lot of new applications and materials. It was just nice to hear from artist who like working on a large scale in the same way that I do. It’s really nice to see that the way I’m processing and making my work could lead to larger pieces. 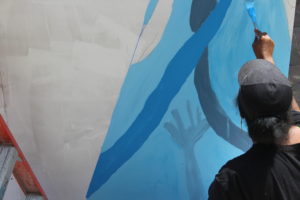 Why did you want to participate in the masterclass?
I thought it was an excellent opportunity to go outside of my area that I’m more familiar with, which is mixed media art, and challenge myself in an environment that was totally new and unexpected. I was asked if I’d ever thought of working in larger forms of art, which I hadn’t. I thought, “let me do it. New challenge.”

What was your inspiration for your piece of the mural?
I believe in hope, and I believe in love. I still believe that, no matter what happens, we can’t give up on hope. The first idea I had was for a piece I would call “Lift,” and it would be arms lifting each other up. Then I thought, it takes hope to lift; there has to be something to lift. I do truly believe, in this day and time, love is all about hope, too. You have to hope for love. 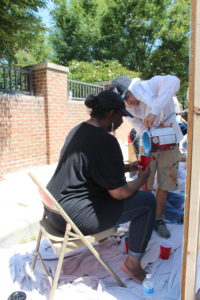 What was the mural making experience like for you on Sunday?
I loved the camaraderie, the way each person lifted each other. Ryan and Eric were wonderful. Eric was a teacher; he knew just how to calm and comfort me. Others let me use their materials; I like the collaboration and community. That’s what those murals are all about. We were creating community on those murals.

What did you learn from the masterclass?
About myself, I learned that I’m a pretty stick-to-it kind of person. I knew absolutely nothing about how to use latex paint, how to paint on a wall, make a design, but I had made up in my mind that I was going to get there on time, do it, and follow through. That’s how you grow; you have to commit. Initially, I wasn’t totally pleased with what I did, but I gave it some breathing room and after awhile, I felt better because I did it. I finished it, I did what was asked and was in unknown territory. That’s how you succeed. You have to commit and follow through no matter what’s going on. This was an exercise in me believing in myself, knowing that I’m capable of doing whatever task falls before me if I stick to it.

The AIR masterclass murals will be on display on August 18, 2019, on the north wall of the Graduate Hotel, on Warren Street, during the Short North Arts District Sunday Bazaar.

Answers have been edited for length and clarity.