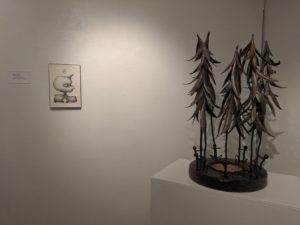 In 2006, Mother Artists at Work, or MAW, showed a group exhibition at Sean Christopher Gallery Ohio titled Birthing the Artist, and in 2010, a second exhibition titled Hard Labor. It comes as no surprise their third group exhibition, Prodromal, follows the theme of labor producing a final result, from a child to an artwork, and beyond. We talked with MAW artists Melissa Ayotte, Sharon Dorsey, and Alissa Head about the show and how they relate to its theme as artists.

When MAW first formed, they “were beginning to recognize intersections between motherhood and creative processes,” said Ayotte. The group’s members supported and encouraged each other as they sought to find an elusive balance between the two, a process Ayotte likened to giving birth to new parts of themselves. Like children, their work has grown and changed, hitting developmental milestones along the way. Theming their shows around labor to symbolize the similarities between motherhood and artistry highlights the challenges of being both, as well as “how art making has to fit around everything else in our lives,” said Head. “It’s a start-stop process, but still an important one in our development as artists.”

As explained in the show summary, “prodromal” means “precursor,” and prodromal labor is sometimes called “false” labor, but in reality is when labor starts and stops for an indeterminate time before active labor begins; it is still a productive and necessary process towards the ultimate fulfillment of labor. For Dorsey, focusing on making art came with motherhood, after she had her first child, despite having less time to create. Though she had frequently used drawing as a creative outlet while growing up, she was inspired by the “beautiful imagery” in children’s books and felt “born again” as an artist discovering new illustrators. 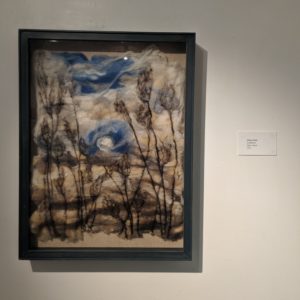 Similarly for Head, a prolific period of art-making was followed by a creative lull, when “life happened,” she said. She first felt like an artist in 2010, when she showed a body of intricate, knitted sculptures at Lindsay Gallery. For Prodromal, Head knew she wanted to be involved, but also knew she needed a different medium that would fit better with her busy life; though making the sculptures was rewarding, it was challenging work. Her new works combine her artistry with her love of photographing Ohio’s parks, which she recreated in wool felt paintings. Each piece embodies the meaning of “prodromal” because of the process-laden effort: hiking to locations, photographing, printing, recreating images in wool with a wet felting process, followed by needle felting and finally finishing with framing.

Ayotte, an art therapist, began exploring a technique called “touch drawing” as a quick creative outlet in her hectic schedule. Touch drawing is a process in which water-based oil paint is rolled out on a flat surface then lightly overlain with a piece of tissue paper to create a canvas for the artist’s hands to move across, using feeling and intuition to create images. In her piece “Reverence,” which was recently selected by members of the public to be included in the Unconventional Mural Series, Ayotte began by applying the touch drawing technique and finished by mounting and defining the image with more in-depth drawing. 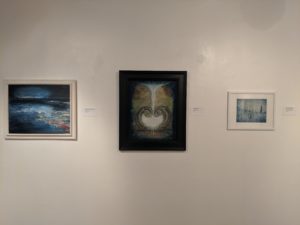 Though the Short North Art District has undergone changes since MAW’s first show in 2006, the artists still feel it is a special place for this exhibition. Ayotte fondly remembers the feeling of arriving to the gallery with both artwork and kids in tow, at a time when she does not recall many children being present at Gallery Hops. “There was something about the experience that felt whole, integrated, and empowering.  Now, this show has a full circle feeling. It’s like returning and launching a new part of the journey,” she said. Head echoes this thought, saying the District will always feel like her “artistic home.”

Prodromal will be on exhibit at Sean Christopher Gallery Ohio, located at 815 N. High St, through August 17, 2019. There will be an artists’ reception during the August 3 Gallery Hop from 6:00pm – 10:00pm, at which attendees can look forward to meeting the artists and seeing the variety of mediums and sub-themes they created in their work. Additional MAW artists include Missy Conley, Laurel Durrett, Judy Chesnut Gerdeman, Kristen Marra Marek, Erina Rae, Harvest Rider, Catherine Bell Smith, and Wendy Yeager.