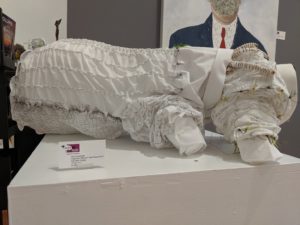 When (Not) Sheep gallerist Caren Petersen was deciding whether to open her gallery last year, she asked her artists if they would be part of the types of shows she wanted to exhibit: dialogue-starting, unapologetic, “rogue.” Their collective response speaks for itself: almost two dozen artists that focus on a range of social issues from environmental to political are represented by the gallery.

This leap of faith is currently on display in the gallery’s latest exhibition, titled Real People Don’t Eat Other People, which features hand-stitched fiber sculptures by Sue Cavanaugh. We talked with Cavanaugh and Petersen about the inspiration for the show, how their relationship informs Cavanaugh’s work, and how the artist’s early influences shape her work ethic.

On a summer night in 2011, Cavanaugh stopped mid-stitch when she heard then-presidential candidate Mitt Romney announce to a the state fair crowd in Iowa, “Corporations are people, my friend!” He was referring to the U.S. Supreme Court’s 5-4 decision on Citizens United v. Federal Election Commission, which gave corporations the right to spend unlimited funds on political ads. Initially dismayed, Cavanaugh continued stitching and began to semi-earnestly wonder: if corporations were people, what would their skin look like? She decided it would be men’s white button-down shirts, stitched and gathered to make a more pronounced wrinkled effect, a symbol of the majority of those who lead corporate America. 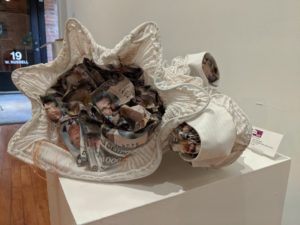 Last year, when agreeing to be part of Petersen’s vision, Cavanaugh had only one of the exhibition’s pieces completed. With some encouragement from Petersen, the artist explored the answer to her question more fully, and asked more: What are the different types of corporations, and what kinds of things can corporations do that people can’t do? The result is a show made up mostly of structural fabric installations and linocut prints, each lampooning how corporations affected the 2016 election, the current U.S. administration, or the current state of U.S. politics. Through the lens of satirical farce, Cavanaugh hopes to highlight topics which she takes seriously but portrays humorously in her work. “I want people to chuckle, as well as be horrified,” she said.

The piece from which the show takes its name depicts one entity “eating” the other; Cavanaugh wanted the consumption of one corporation by another to feel animalistic – to “give it teeth.” In “The Supremes,” five shirts are combined into one multi-headed amorphous entity representing the conservative justices of the U.S. Supreme Court. In “Shell Corporation: Make Affairs Go Away,” a seashell-shaped figure is stuffed with cash printed with Michael Cohen’s likeness. “Corporate Cup for Buying Elections” is filled to the brim with the funds corporations set aside to sway elections to their liking, a play on the idea of being awarded versus winning. Linocut prints hung up along the front wall of the gallery show various settings that involve two people and one corporation doing things only actual people can do, such as yoga, having a picnic, and knitting a sweater. 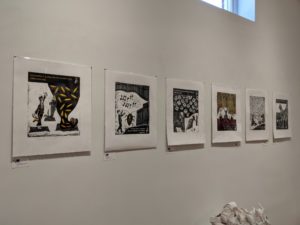 As impressive as her uncanny ability to concisely comment on a particular topic is Cavanaugh’s range of techniques, almost all of which are self taught. The method used to create the shirts, shibori, was first used over 500 years ago in Japan as a way to make precise patterns for kimono fabric through the use of stitching and dying. Though she had long been quilting, a hobby she learned from her mother, Cavanaugh decided to teach herself to dye and pattern fabric. She found the shibori technique in a book and gave it a try, first using traditional shibori stitches and then experimenting with her own to create more painterly “art quilts.” Eventually, her take on shibori created “Corporate Takeover” to call attention to the topics presented in the show.

Petersen also appreciates Cavanaugh’s openness to trying new things, such as the linocuts featured in Real People Don’t Eat Other People. The original cartoons are part of a book of comics she created at Petersen’s suggestion, called “A Corporation Is a Person Like The Emperor’s New Clothes Were Real.” Though she had no previous experience with cartoons, she taught herself, practicing and improving until she reached the point of being able to make her own book.

“That’s the joy of being an artist, is agreeing to do things that you don’t really know how to do,” she said.

Real People Don’t Eat Other People will be on display at (Not) Sheep Gallery, located at 17 W. Russell St., through May 26.