As is evident from the name she chose for her gallery, (Not) Sheep, gallerist Caren Petersen believes in art that is thought-provoking and conversation-starting. During the gallery’s opening in October 2018, she exhibited an array of work by gallery artists to showcase a sampling of the frank, provocative work that she intends to be the purpose of the gallery. Her latest collection of works includes pieces by several of those artists, but is mainly an invitational of two non-gallery artists. Lynne Riding and Priscilla Roggenkamp, who share the stage for Reflections While South, talked with us about an exhibition that aims to explore themes found most prevalently in rural locations, from politics to what it means to be a “southern” region. 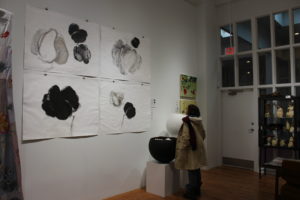 Tucked toward the back of the gallery is Riding’s body of work for the exhibition – also titled Reflections While South (it was so befitting that the invitational’s title was borrowed from it) – which displays similar but separate pieces; four charcoal drawings of cotton are hung on the wall next to two large, monochromatic paper mache bowls. Riding, a Welsh artist who now lives in South Carolina and teaches as the Art Institute of Charleston, bases the majority of her work on a sense of place and what she picks up from her surroundings: moods, colors, lines, space, shapes, and composition. After sketching what she sees, she returns to her studio and creates the pieces that act as metaphors for the ideas she wishes to portray. Riding feels the meaning behind her work is intentional, but subtle. “I think being a women, and the way I was brought up in England, I was quiet and told to listen and not speak up,” she said. “I think my work is very coded, always. I can’t blurt out and find it hard to just say what it is.” 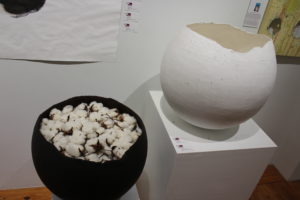 For Reflections While South, Riding was drawn to the beauty of the cotton in the fields of South Carolina and struck by how the perceived pureness of cotton and of a pure white cotton sheet is juxtaposed with the “dark underside” of the cotton industry. Fittingly, her drawings and bowls are starkly high contrast to be representative of skin. Apart from the storied history of the industry in the southeast quadrant of the United States, where she is currently living, Riding has another unique connection to cotton through her grandmother, who worked in a Lancashire mill as a loom lint cleaner from the time she was 13 years old. With hundreds of loom machines going at one time, Riding’s grandmother, like many children of the time, went deaf from the clatter. Riding recently had the chance to take a tour of an old mill and full understand the impact of the noise. “I had not appreciation until I saw one of these machines working,” she said. “It was really quite moving.” 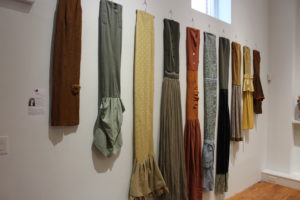 Displayed prominently next to the entrance of the gallery is part of the invitational’s second main feature, one of two pieces by Roggenkamp, the second of which is hard to miss due to its height and frenzied mixed patterns. The artist lived in Virginia and Arkansas before settling in the Appalachian city of Alliance, Ohio, where she teaches at Ashland University. Her experience in “southern” states and in a rural, southern part of Ohio, particularly as a woman, has helped formed the common threads that run through her work, namely of the politics of the body and of clothing as a vessel. She also tends to create multiple parts for a single piece to portray a sense of community, which she feels is stronger than individual units.

“Turn, Turn, Turn” is a crescendo and decrescendo of several dress-like forms that thinks about shared and non-shared experiences in body politics. “The very similarly formed clothings change, they alter, they become part of who we are as we face challenges of life and we age as people,” she said. Though Roggenkamp oftens uses clothing as a stand-in for a person, figure, or human, she makes choices that are intended to make her works feel more universally understood rather than inherently masculine of feminine. However, of “Turn, Turn, Turn,” she said: “I’ve faced a lot of change and I think change is what we, as women, internalize,” noting that she feels women, more so than men, must “figure out” what their responses are to aging based on societal expectations and norms. 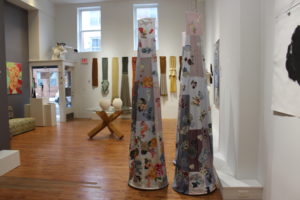 The second piece in the invitational, titled “Keepers of the Faith,” is a literally towering installation that immediately calls to mind The Handmaid’s Tale-esque coverings. Roggenkamp’s inspiration for the piece came from thinking about utilitarian vessels, particularly clothespin bags, which are used for hanging clothes on a line. The four figures have small oval openings near the top but are closed and sewn together at the bottom, making them impossible to actually wear. The symbolism is intended to convey how people in general, and women specifically, “keep the faith” with who we are as we navigate life, family, children, relationships, and jobs. The rigid lines of one set of fabric she used from men’s shirts is meant to juxtapose the more feminine floral fabric and present a duality to the forms.

Among these invitatiational pieces are recurring works by gallery artists, such as sock puppets/voodoo protection dolls by Sue Cavanaugh titled “Holier Than Thou”; embroidered pieces by Kathryn Shinko titled “The Dirty Samplers”; Appalachian quilts by Katherine Adkins; acrylic paintings by Kim Goldfarb; and more.