Art Spotlight: “The Masks We Wear” at (Not) Sheep Gallery 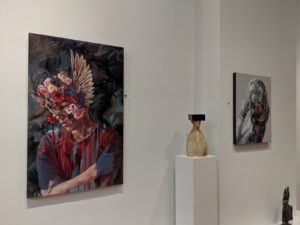 In some ways, one could say the current exhibition at (Not) Sheep Gallery has been 22 years in the making, dating back to when gallerist Caren Petersen opened her first space, Muse Gallery. Her first employee developed a love and appreciation for art, to the point that he worked in exchange for artworks, and eventually brought his then-boyfriend, painter Paul Richmond, to the gallery. Now, Richmond has his own exhibition at (Not) Sheep, an annual show in the gallery for the month of October titled The Masks We Wear. We talked to Richmond about his inspiration and concept, the importance of community, his activism through art, and his love of the Short North Arts District.

When Columbus-native Richmond first visited Muse Gallery 13 years ago, he was impressed with Petersen’s mix of represented artists and eye for curating exhibitions. Though the work he was doing “wasn’t ready yet” for a gallery show, when Petersen reached out a year ago to inquire about his interest in an exhibition at (Not) Sheep, he jumped at the opportunity. “The wonderful things Caren is doing with this gallery are a great fit for what I believe art is, and what it should do, and what it can do,” he said of the space, which is known for not shying away from art that comments on current affairs and could be called controversial. “I think my most effective form of activism is on canvas, and it’s wonderful when I can connect with people who can use it in ways that are helpful to the causes.” 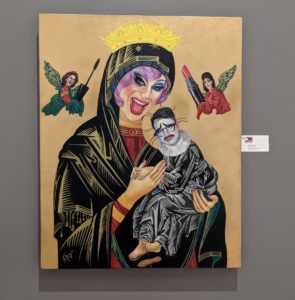 Armed with only the title of the show and given free reign over the concept, Richmond chose to paint masked figures to highlight those on the fringes of mainstream society; “people who are marginalized and made invisible by the patriarchy,” he said. As most of his work includes a figurative component, adding masks proved an interesting challenge for Richmond as he tried to convey facial emotion, elicit a sense of empathy, and reveal more about the subjects while they were partially concealed. A natural storyteller, the Columbus College of Art & Design alum used bold colors and gestural, emotive marks and expressive paint application techniques to create rich textures and give his subjects physicality. “I wanted the masks and the choices I made on the canvas to make the figures have a strong presence as a way of saying, ‘we are here, you can’t make us invisible,'” he said.

One of the most striking paintings in the show, titled “Chosen Family,” depicts saint-like figures that are most easily recognizable to locals: West drag family members Nina West, Virginia West, Kari Kerning, and Christian Cimoroni. This piece merges two of Richmond’s cultural memories – the Columbus LGBTQ community, and his childhood church. The image is stylized like a stained glass window and was chosen because he felt there was an connection between the feeling of belonging that people get from being part of any community. He chose the West family for both their importance in the local LGBTQ community and in his own life. When he came out as gay and went to Axis for the first time, he met Nina West, “this big, cartoonish, bubbly character,” he recalls. “I think she could sense there was this new, young, nervous thing; she came over and gave me a hug, welcomed me, and made me feel so at ease. I was like, ‘I found my people, it’s magical here.'” He has since had a close friendship with West and the many members of the family. 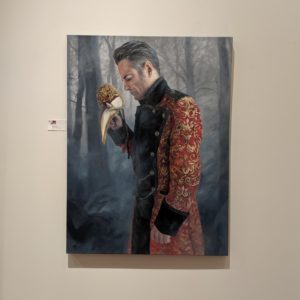 Another painting in the exhibition that is close to Richmond’s heart, titled “Wounded Healer,” depicts his husband, Dennis Niekro, the former Muse Gallery employee and current oncology nurse practitioner. The painted figure wears a long, resplendent coat and intricately-decorated beak-like plague mask as a play on Renaissance doctors, the mask meant to both protect them and make them instantly recognizable. Niekro helped with developing the piece, choosing the coat and the figure’s setting, a foggy forest, as a nod to their current home in misty Monterey, California. “When [Niekro] is treating patients, he almost has to wear a mask to separate his own identity and emotions from the situation,” Richmond said. “But, a lot of times he’ll have to take it off and be very vulnerable and real with his patients if he’s delivering difficult or painful news.”

Fans of Richmond’s work will likely recognize another piece in the show, titled “American Dreamer,” which also deals with a tough subject that is personal to him. The piece, a slightly more abstract close up of a child’s expressive face that uses muted tones and sparse pastels, is overlain with a thin but prominent coil of vibrant, angry red barbed wire, its sharp spikes menacing palpably from the canvas. Richmond, who has many immigrant friends and neighbors, created this piece as a way to depict his heartbreak from and frustration with the way an entire community has been depicted by American politicians. “The barbed wire is very much like the mask the politicians are creating to hide the humanity of these wonderful people, and to prevent us from feeling empathy for them,” Richmond said. “When I painted the barbed wire, it was so painful; I felt like I was harming this person I had created.” The piece has since been used with his encouragement by activist group Vigil for Democracy, which protests recently-enacted punitive immigration laws and regulations by projecting the piece onto government buildings and displaying it on mobile billboards. 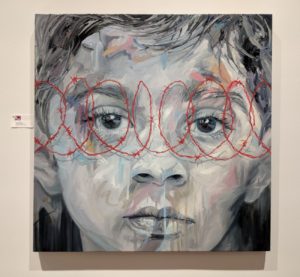 Though “American Dreamer” has been seen by millions and Richmond has achieved international commercial success as an artist, he feels the opportunity to show in the Short North Arts District is one of his greatest accomplishments. “I love being here, I loved going to CCAD, there’s a wonderful art community, and it all seems to center around the Short North area. As a college student and afterwards, for me, the pinnacle of being an artist meant having a show in a gallery in the Short North,” he said. “I’m doing a lot of awesome things in California and I love what I do, but it all pales in comparison to the excitement of coming back home and having this show.”

The Masks We Wear will be on display at (Not) Sheep Gallery, located at 17 W. Russell St, through October 28. In November, Richmond will receive a Commitment to Service Alumni Award from CCAD, and will also begin a collaborative workshop with Stonewall Columbus and Art Your Way, a project of his anti-bullying organization You Will Rise.