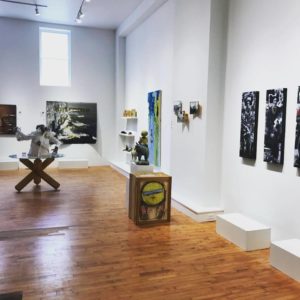 Upon entering (Not) Sheep Gallery, the Short North Arts District’s latest, you might expect to find aesthetically pleasing art similar to what is housed in the galleries all along (and off) High Street. You wouldn’t be wrong, but some might not say you’re right; after all, beauty is in the eye of the beholder.

The first impression you might have of (Not) Sheep is a pretty accurate depiction of its intentions. Gallerist Caren Petersen, longtime owner of the pop-up Muse Gallery, calls the pieces that (Not) Sheep shows “rogue art.” Whether you love it immediately or need a little more time to try to understand it, the experience and dialogue about the artists and their work is exactly why Petersen realized she wanted to open the space. However, despite her decades of experience as a gallerist, it took a series of life-changing events for her to come to the decision.

Two years ago, Petersen had open heart surgery, an unexpected life-saving operation. She faced a long and hard recovery, near the end of which the 2016 election occurred. Coupled with her recovery, the election results left her in a year-long “funk.” “I kept thinking, ‘what can I do?’ and trying to pull myself out of this depression,” Petersen said. “It finally kind of just hit me that art is what I do.” Petersen knew that in addition to what she called “marketable” artwork, some of the artists represented by Muse Gallery also created artwork that might be considered controversial. “I knew I may make no money, but it seemed more important to provide a venue for artists to be able to say things through their work that I think can be impactful,” she said.

Serendipitously, The Wood Companies contacted Petersen about permanently establishing Muse Gallery in the District around this time. Though many had said on numerous occasions over the years that she should open in the District, she had reservations about the responsibilities of a brick-and-mortar. However, she expressed interest in starting a new gallery focused on showing controversial artwork that provides artist commentary on the current political climate, an idea they encouraged. “The name literally popped into my head – I had not planned it, had not thought about it. I said I want to call it (Not) Sheep Gallery, and Wood Co. loved it,” she said. 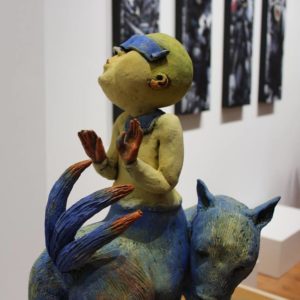 During the September 2018 Gallery Hop, (Not) Sheep Gallery made its debut at 17 W. Russell St. Petersen loves the location, which is visible from High Street and neighbor to several other galleries and the Pizzuti Collection, and the modest yet open space for which she has big plans. In addition to offering individual shows to each of the 13 artists represented by the gallery, Petersen will host six invitational shows open to non-represented artists, as well as experiential and environmental events such as quarterly poetry slams. The first, happening November 8 at 6:00pm, will be performed by Rogue Poets, a sect of Writing Wrongs slam poetry group.

(Not) Sheep Gallery will continue its opening show for the October 6, 2018 Gallery Hop. Stop by to see the works of the gallery’s artists during October Gallery Hop and throughout the month of October.