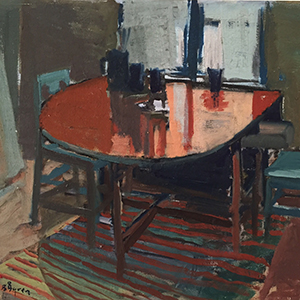 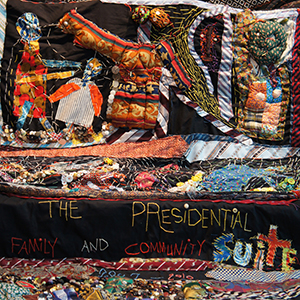 Stop by both the Columbus Museum of Art and Hammond Harkins Galleries to experience the breadth of Aminah’s late opus created in honor of President Barack Obama. 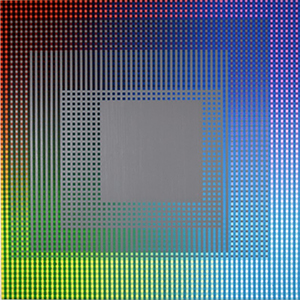 Joseph Editions presents Technicolor, an exhibition of new editions by New York based artist Derrick Adams and paintings by emerging Columbus based artist Mike Nemire. Though different in subject matter, the works share a visual language of color – the pixelated screen. The exhibition is on view until October 29.

Derrick Adams (b. 1970) is a Brooklyn-based artist whose strong design sense makes for complex structured assemblages that draw on urban plans and architecture frameworks, fashion, and pop culture. His practice is deeply rooted in ideas about the African American experience, the shape of that identity, and persisting stereotypes. Mike Nemire (b. 1981) received his MFA at Pratt and has recently moved back to Columbus after a decade in New York City. His meticulous paintings are grounded in 20th-century color theory and contextualized within the 32-bit color palette of contemporary digital technology. 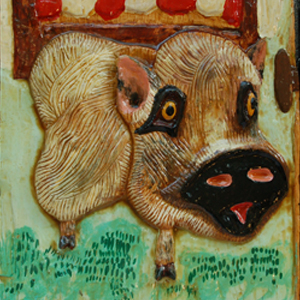 After a long hiatus from carving, self-taught artist Ricky Barnes is back at Lindsay Gallery with new work. See new woodcarving pieces that have been added to his exhibition for the October Hop. Additionally, see the band Ricky Barnes and the Savory Chickens play starting at 7:30pm in the gallery. 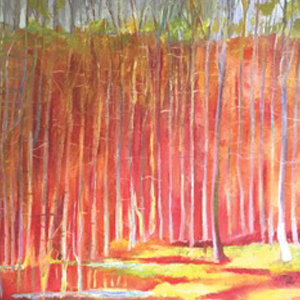 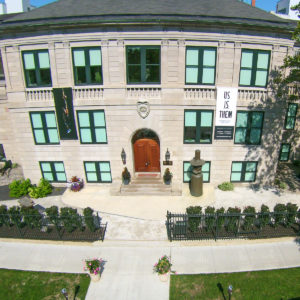 Pizzuti Collection
Kick off Gallery Hop at Pizzuti Collection with their Family Days Series, which provides free admission to visitors on the first Saturday of each month. Gather your family for an art-filled day that features guided children’s tours at 11:30am, 1:30pm, and 3:30pm and an art inspired scavenger hunt. Each child will also be given a sketchbook to create their own masterpieces.

Pacesetters After Hours is a perfect starting point for your evening out on the town for Gallery Hop. Grab a colleague or two and connect with fellow art lovers and cultural enthusiasts from 6:00-8:00pm. See Cuban Forever Revisited, a return to the radical and refined beauty of Cuba. The remarkable exhibition will feature approximately 70 works including paintings, prints, photography, sculpture, and video. 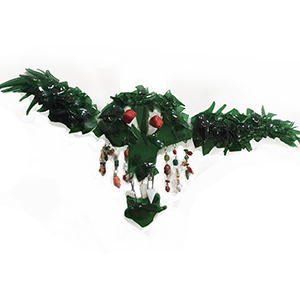 pm gallery
Vicki Moon Spiegel: Taking Wings at pm gallery is an exploration of the Day of the Dead in fused glass and mixed media. Spiegel uses repurposed glass, found objects, beads and more in her work. She was formerly the graphics artist at The Columbus Zoo and Aquarium, and since them she has been following her muse wherever it may take her. 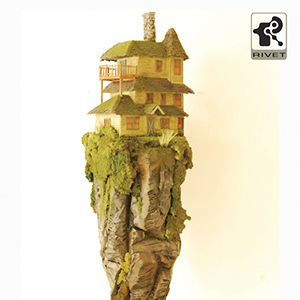 Rivet
AS WE KNEW IT: Works by Chris Austin is on display at Rivet from October 1- 31 with artist reception on Saturday, October 1 from 7:00-10:00pm.

AS WE KNEW IT explores the significant impact mankind has had on our environment and the effects of global warming through paintings and sculpture. This exhibition touches on the human relationship with mother nature and its impacts on the past, present and future. 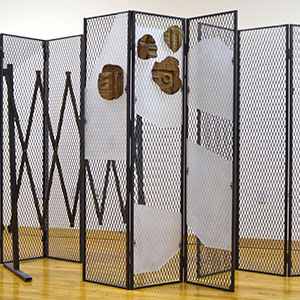 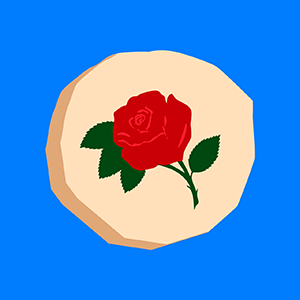 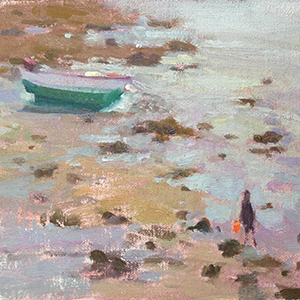 Sharon Weiss Gallery
See the eighth solo exhibition by Debra Joyce Dawson at Sharon Weiss Gallery with an artist’s reception on September 30 from 6:00-8:00pm. The artist will be painting in the gallery during Gallery Hop on October 1. This exhibition features Dawson’s plein air and studio works predominantly on a theme of water. Whether it be the coasts of France and England, structures alongside river banks and beaches, or the illusive quality of light falling on and through water lilies, her work is always about what intrigues her. Dawson invites you to share the themes that have fascinated her, as well as paintings from her 27 Dresses Series, and a few fantastical monotypes, in addition to paintings from Ohio. 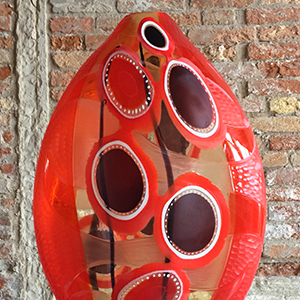 Sherrie Gallerie
In October, Sherrie Gallerie will show an exhibition of contemporary glass featuring new work by premier Italian glassblower Davide Salvadore, and his sons, Mattia & Marco Salvadore. The exhibition is on view through October 14. 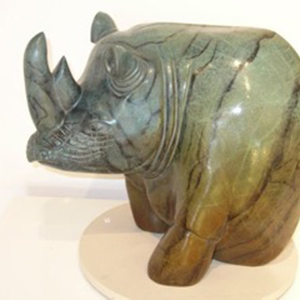 Hit the Hop is a bi-annual juried show of Columbus area artists that provides them with the unique opportunity to showcase their work at Studios on High. For the first time, the October show will include two- and three-dimensional works. Of the hundreds of pieces submitted, approximately 20 artists will be showcased. Attend the October Hop to vote on the people’s choice award. 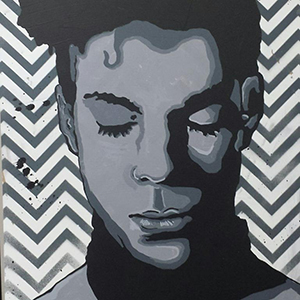 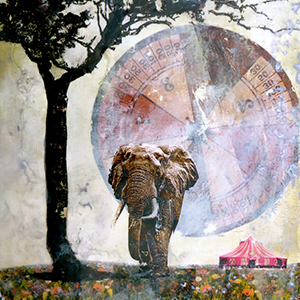 Denmark on High
During October, Denmark on High will be featuring Catherine Hokacker. See the artist’s work in their gallery at 463 N. High Street. 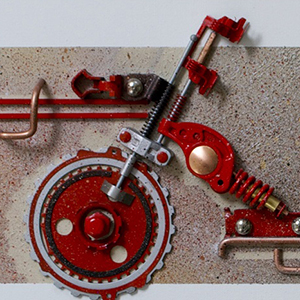 Katherine Mitchell’s hand-sculpted clay pumpkins and gargoyles lend themselves to the Raku firing technique, an unpredictable process, which leaves smoke infused cracks and metallic patinas. A portion of sales for Katherine’s portion of this exhibit will be donated to Columbus Kaleidoscope Youth Center.

Jay Ashrafi received his Master’s Degree in Architecture and City Planning from the Ohio State University. His focus is on the artistic aspects of the architecture. A multi-step 3-dimensional process, he starts with a sketch and then puts a cement mixture on the base adding different layers of paints sprayed later. Jay and Kathy will greet guests at the October Gallery Hop from 6:00-9:00pm. Light refreshments will be served. 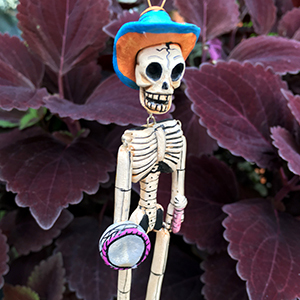 Enjoy some spontaneous dancing during the event from Habeeba’s Dance of the Arts and Danceville, U.S.A. Global Gifts will serve fair-trade coffee samples and baked goods from the Women’s Bean Project. Stop by anytime between now and Gallery Hop to enter to win this fair trade Dia de los Muertos ornament, handmade in Peru. 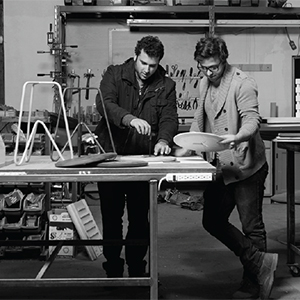 Opening Saturday October 1, ModernMadeOhio is a multi-site exhibition of six furniture collections, designed and made in Ohio. The exhibit will be on view at the Hilton Columbus Downtown, with a closing event on October 28 at 6:00pm. 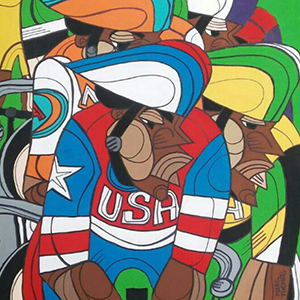 House Beer
A native of Columbus, OH, Marc Anthony Thomas found his love of art at the age of 9. The illumination of his personal artistic rendering is taken from the Harlem Renaissance Era and he specifically enjoyed the works of Jacob Lawrence. Marc’s work captures relatable moments within each piece. Each piece is textured in feeling, emotions, and soul. Marc has exhibited in numerous location within the greater Columbus area. Marc’s Olympics in Abstract series was recently featured on NBC4. See his work on display at House Beer. 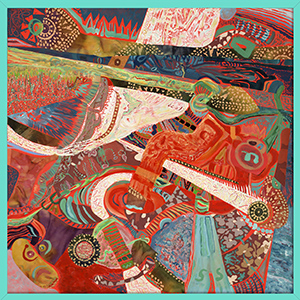 Lemongrass Fusion Bistro
During the October Gallery Hop and throughout October, Lemongrass will feature paintings by abstract artist, Scott Steelman. 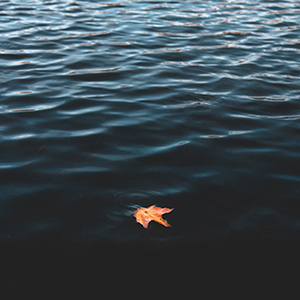 “Specifically in nature, there is much we miss unless we take a closer look,” Geiser said. “In light of this in my show I’ll be sharing a line of up close ups in nature to give viewers a refreshing look at an everyday plant or scene.”  In addition to Mitch’s new exhibit, hors d’oeuvres and beverages will be available for gallery guests. 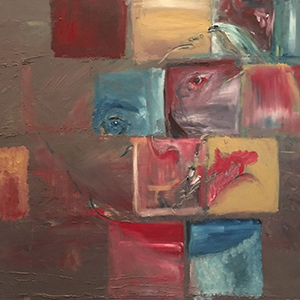 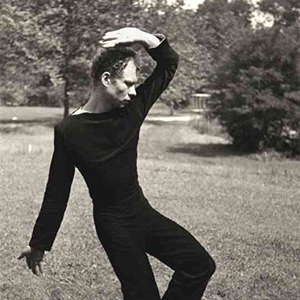 Wexner Center for the Arts
This fall, step into an immersive, sweeping exploration of one of America’s most important artistic legacies. Featuring 200 works by 90 artists, Leap Before You Look: Black Mountain College 1933–1957 sheds light on an experimental school in North Carolina that has had an extraordinary impact on contemporary art. Its influence is still profoundly felt today—and perhaps nowhere more pervasively than at the Wex, where this acclaimed exhibition makes its only stop in the Midwest. See the exhibition on display at the Wex. 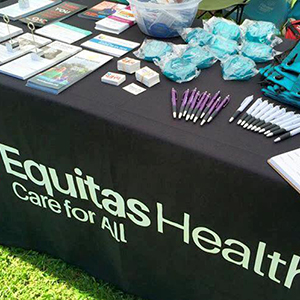 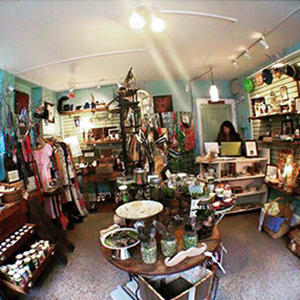 Glean
Join Glean, at the October Gallery Hop for psychic/tarot card readings with Willow, from 5:00-9:00pm. Willow has over 20 years experience and has been featured on Good Day Columbus. Get a 15-minute reading for $25. Advanced sign-up is suggested, as she books up fast. Email shopglean@gmail.com for advanced bookings. 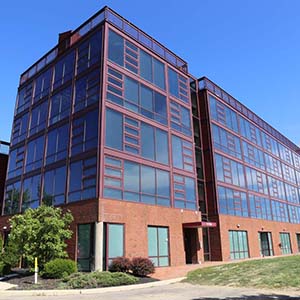 The Vetro Lofts
The Vetro Lofts are true loft-style condominiums that offer unmatched luxury with the benefit of living in the heart of Italian Village. The building contains 30 private, two-story loft style condos, each with two bedrooms and two full-bathrooms.

Visit the Vetro Lofts for a tour during their open house event on Gallery Hop Saturday from 5:00-9:00pm. They are located off 4th Street between Neruda Ave and Auden Ave in the SE corner of the Jeffrey Park development.